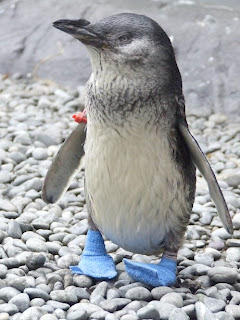 Cute little guy, isn't he? A penguin with shoes! It doesn't get much better than that! I was so excited when I came across this picture. When I was twelve, I collected things with penguins on them. Yeah, I know it's weird, but it's true. I was fascinated by the waddling creatures.
As I've mentioned in a previous post, I also loved writing poetry. I already shared my poem, Piano Man. So, now I'll share my poem, A Penguin to Fly. As you are reading, please keep in mind I was only twelve when I wrote it.
Formally dressed in black and white
He knew it wasn't fair, nor was it right
He wobbled with his head held high
Wistfully awaiting the day he could fly
He could swim, he could slide
He could slip and he could glide
But he had yet to fly and soar
Though he had so much, he still wanted more
He tried and he tried till the day grew old
He kept trying still as the night grew cold
He didn't care about the dark or the chill
For to fly, he would try and try still
Though we all know he will never fly
He won't give up, again he will try
He'll try his hardest till he reaches his goal
Down there, near the South Pole
Now, you knew this part was coming--the part where I relate the penguin to my writing. Well, I'm glad I'm not that penguin. Because some day, I'm going to fly!
Posted by Susan R. Mills at 11:42 AM

This is the second time I've stumbled upon your post in as many days. I like your style! I also have just finished my first novel. Wish you luck!

Strange Fiction,
I love you as much as quixotic! After all, you are my second follower! Thanks so much. I'm also the wife of a cowpoke! How odd is that? Perhaps it's fate you and I come across eachother. Our cows are of the black and white variety (Holstein Dairy cows, in case any one is wondering). What about yours?

Our cows are the big white Charolais - breeding stock. We lost our old Jersey milk cow this spring, a real heartbreaker. She left us a bull calf though so I had two months of bottle feeding a BIG baby. The really great news is, after I weaned him, he found himself a new mom and a little sister! lol - I love the Holsteins too!