The Signs of Fall...

In Kansas, Sunflowers are a dead giveaway that fall has arrived. They grow wild and are a common sight. But do they float? Why, you may ask, would I want to know that? Well, research for my latest project, of course. Why else?

Anyway, I wanted to pull over to the side of the road and cut one, but the time never felt right. I was either running late for something or the car behind me seemed to be in a hurry. Stopping right in the middle of the road would have been rude. So, I did what any other self-respecting author would do and bribed my eldest child to go out and cut one for me.

FYI...Sunflowers do float. In fact, one is floating in my bath tub right now.

So, what's the craziest research project you've ever done? Come on...please tell. It has to be worse than mine. Right? Please tell me it's worse than mine...
Posted by Susan R. Mills at 8:00 AM 26 comments:

Not Sure If I'm Coming or Going These Days... 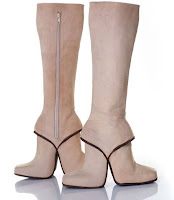 It's been one of those weeks. Too much stuff going on to keep up, but I will say this, I've acquired a lot of good fodder in my comings and goings. It's amazing what ideas strike at the least expected times!

Before I continue, I'd like to thank my good friend, Lily Robinson, for the shoe picture. She sent me an email with several, and this one was perfect for how I'm feeling now.

Okay, so, where was I? Oh, yes. Fodder. It comes at the oddest times. My kids, all three of them, have had life changing events this week. It's a lot to deal with, especially since not all of the events were good. But, here's what I learned...as bad as things can get for my normal, run-of-the-mill kids (our last name is Mills for a reason, you know), it has to be even worse for my characters. In fact, it has to be so devastatingly worse, that I wouldn't wish that kind of pain on my most awful enemy.

At first, I was hesitant to cause my characters so much suffering. Just like I am with my kids. The last thing I want is for them to go through anything less than utter happiness. But then (and I knew it all along but refused to admit it), I realized my characters would suffer a far greater defeat if I didn't really let them have it. They'd never see the light of day if I didn't put them through the most awful kind of hell.

So I did. And, you know what else I realized? Writing hell for my characters made all the little crappy things my own kids were going through seem like a walk in the park (trite, I know, but this a blog, people, not a novel!)

Anyways, my point is this...writing YA has always been an escape for me. It took me back to my own youth. Now, it's an even greater escape. I get to take all the bad stuff that happens to my kids, quadruple it, and dump it in the lap of my characters. It doesn't get much better than that.

Do you ever transfer your own suffering, or that of your family, onto your characters?

These Shoes Are So Familiar

They're just another pair of flip flops. Sure, they're pink and all, but I've seen a million pair exactly the same. Doesn't mean I don't like them, but it does mean I'm not going to rush out and buy them. And, I'm certainly not going to call all of my friends and tell them they MUST. BUY. THESE. SHOES.

So, I was reading this published book last night, and the strangest thing happened. I started having deja-vu. I mean in a bad way. It kept going and going and going...(you get the point). Finally, I realized what the problem was. It wasn't deja-vu at all. I had written the exact same scenario three months ago. My first thought was that this author had stolen my premise. Then, I came to my senses. There's no way she could have stolen my material. After all, this book was published three years ago. I finally accepted the fact that my "never-been-done-before" premise had, in fact, been done before.

I reacted the exact same way any self-respecting author would react. I ranted and raved, throwing a hissy fit like no other, and then collapsed in a bath of pity tears.

Then, I picked myself up, dusted myself off, and had a burning of the "never-been-done-before" premise party. I watched three months of work (thank God above it wasn't more than that) go up in flames. All I can say is, as painful as it was to throw a beloved project to the wayside, it was far less painful than actually finishing the project, submitting it, and then being told it had been done before.

This, my friends, is why we should read! Especially in our genre. You never know, your next brilliant idea just might have been done before.