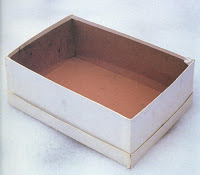 My shoe box is completely empty. I don't have a single thing to talk about, and I'm wondering why. Last week, I thought of a zillion things I wanted to discuss here. I even knew what shoe pictures I wanted to post. Then the weekend got all crazy on me, and now I can't remember any of them.

Life triples in business for me this time of year, and my mind is a little frazzled. Both my sons play baseball which means I lose about 15 hours a week of time, and my daughter's dance season is coming to an end so there's lots of extra activity going on involving that. And this year is going to be even busier since she's graduating. Last year, when things got hectic, I got so overwhelmed that I took a break from blogging and didn't come back for six months. I don't want that to happen again. It's got me wondering what I can do to keep it from happening. I know one thing...I'm going to cut my blogging down to one day a week. And I'm warning you, there may be a lot more empty shoe box posts.

Hmm...look at that. I guess I had something to talk about after all.

What do you do when life gets crazy and you can't think straight?

...tennis shoes and wedding dresses don't quite go together. Just like some might say backstory and novel beginnings don't quite go together. We're all entitled to our opinions, which there are plenty of on this topic. The general consensus is that backstory does not belong on the early pages of a novel. But, and this is a BIG but, even those opposed to backstory in novel beginnings think there are exceptions to this rule.

Many of you know how much respect I have for literary agent, Donald Maass, especially if you've read my series on THE FIRE IN FICTION. (If you haven't, you can access the posts from my sidebar). Anyway, here's what he has to say about early backstory:

Backstory is the bane of virtually all manuscripts. Authors imagine that readers need, even want, a certain amount of filling in. I can see why they believe that. It starts with critique groups in which writers hear comments such as, "I love this character! You need to tell me more about her!" Yes, the author does. But not right away. As they say in the theater, make 'em wait. Later in the novel backstory can become a revelation; in the first chapter it always bogs things down.

But there are exceptions.

Maass goes on to highlight an example from the opening pages of Robin Hobb's ROYAL ASSASSIN in which character Will Fitz engages in an interior monologue exploring his motives. It is littered with backstory. If you'd like to read the full example, it's on page 208-209 of THE FIRE IN FICTION. Maass explains that this backstory works in the opening pages because it expresses the character's inner tension.

Maass concludes his example with this comment (which I feel sums up the whole topic of backstory in a nutshell):

To put it more simply, Hobbs uses the past to create present conflict. That is the secret of making backstory work.

Okay, I don't know about you, but I'm really sick of the subject of backstory. This is my last post on the matter. Well...at least for now. I can't promise the topic will never be brought up again on this blog. But I can promise it will be a while before I mention it again.

But I would like to hear any of your final thoughts. How do you feel about backstory on the early pages of a novel? What makes it work? What makes you want to put the novel down?

I'll be back next week to discuss an entirely different subject. Not sure what, but I'll be back. Until then, have a fabulous weekend!

These Shoes Don't Belong In The Snow!

Before I get into the whole gist of this post, I have to give a big shout out to my friend Robyn Campbell. A short story of hers will be published in the anthology REAL WOMEN, REAL STORIES. For all you naysayers out there about the phenomenon of my blog breaks (you know, the one where I go on break and someone who follows me gets good news), well, this is yet more proof. If you don't already know Robyn, you should go say hello and congratulate her. She's awesome!

Okay, so now on to the gist of this post. When I left on break, I was exploring the topic of backstory. We've talked a little about where it belongs in a manuscript, but what we haven't touched on is where it doesn't belong.

One thing I've found repeated over and over again by successful authors, agents, and publishers alike, is that backstory does not belong in dialogue.

Noah Lukeman, literary agent and author of The First Five Pages, has this to say about it:

Informative dialogue is most often found in "high concept" novels, where the writer is so anxious to execute his idea that he never stops to consider the wants and needs of his characters. Dialogue of this sort is sometimes used to fill the reader in on current or future events, but is most commonly found filling the reader in on "backstory," on things that have already happened (to this end, it is commonly found toward the beginning of manuscripts).

The most common malady is use of dialogue to convey backstory. The solution is to follow this rule: Dialogue should not be used to state things both characters already know, that is, one character should not remind the other character of something. It is an obvious ploy, intended only for the reader.


Donald Maass, literary agent and author of several books on the craft of writing, has this to say about it in THE FIRE IN FICTION:

Info dump is deadly. Backstory bogs things down. Zipping up information to make it more frightening or relevant doesn't help. Information is still just information. It's dead weight. Many authors attempt to get around that by disguising info dump as dialogue, but unfortunately that does not automatically work. Dialogue drags unless it is infused with tension; but, as we've seen, even that will only be effective when it is a tug-of-war between talkers.

There are countless other sources on the topic which I could list here, but just do an Internet search. I'm sure you'll find the same sources on your own.

Bottom line is this, (at least in my opinion), tread lightly when it comes to using dialogue to convey backstory. It's not easy to pull off, but as both of the above named sources admit, it can be done.

So, what do you think about backstory in dialogue?

Come back on Friday for a discussion about backstory in the early pages of a manuscript.

I'm So Happy To Be Back! 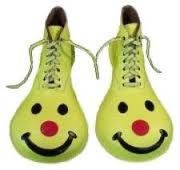 Okay, so my break lasted a little longer than I planned, but I'm back now for a while. And I couldn't be happier!

Before I left on break, we were discussing backstory. Speaking of backstory...I could give you a rundown of all the reasons I was gone so long, but I won't bore you with the details. Let's just say that a lot has been going on. None of it terribly exciting. None of it terribly terrible. Just ordinary, everyday stuff.

I'll return to the topic of backstory in my next couple of posts, but today, I want to hear what all I've missed around here? Come one...tell me! Who's got awesome news to share?
Posted by Susan R. Mills at 8:00 AM 22 comments: