These Shoes are Just Creepy! (RE-POST) 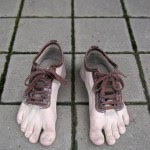 Seriously, who would wear them? If the point is to scare, they don't accomplish it. They do nothing for me. Well, they do kind of gross me out. But other than that, nothing. In The Fire in Fiction, Donald Maass discusses the antagonist, the villain, the doer of all evil. He says that in the work submitted to him, most of these mean-spirited characters fall flat. Why is that? Well, because they have no depth. He or she is just bad by default without explanation, and just really aren't that scary. Mr. Maass suggests that one way to fuel fire into our writing is by giving the villain some human characteristics and a reason for acting the way he does. He can't just be bad for the sake of being bad. The reader won't buy into it. Maass even goes so far as to suggest that we make him somewhat endearing to the reader. This adds great depth to a story. My primary antagonist is somewhat ambiguous and needs to stay that way, so this is difficult for me. I'll be thinking about it during my rewrites, though. In the mean time, I'll be applying it to my secondary antagonists. Is your antagonist just bad for the sake of being bad? Or have you given him some motivation for his behavior? Please share.
Posted by Susan R. Mills at 7:54 AM

Very interesting post!!! My antagonist in Spellbound is mean and nasty, but you know what...I'm not sure if I ever really give the reason why! I was so busy concentrating on making the reader hare her and root for the protagonist, that I never really gave it much thought! Thanks for the food for thought! But like you, I am not so sure I want to give her anything that would be endearing to the reader. I want my reader to really really hate her!

And yeah...those shoes are kinda disturbing.

I just read a novel with a very charismatic villian. The kind of guy you think you could like, if not for his evil deeds. A villian like this can be the scariest of all because you realize how easy it could be to be taken in by him.

I read the same kind of thing in 'Writing Fiction for Dummies' by Randy Ingermanson (great book that I doubt I would have bought had I not found Randy's website first and realized his genius :-) Anyway, I am in the very beginning stages of planning my novel -- this is the first time I have actually planned and I like it so far -- so my antagonist was still pretty vague. This idea helped me stop and think about him and why he was going to do the things he was going to do. Now he has a whole story all his own (I am sure little of this will actually appear in my current novel -- but who knows, maybe one day he will get a novel all his own). Knowing my characters stories is really helping me write my scenes. I know them better, understand them more, and that helps me guess what they are going to do next. It's funny that this whole world and all the people in it only exist in my head -- it doesn't always feel that way :-)

I still need to make my bad guy bad.

BTW, those shoes are still freaking me out!

It's interesting because there is an antagonist--it's the reason my character has to leave her life behind--but I don't ever write from his viewpoint. He doesn't make an "on screen" appearance until later. He's more of a shadowy threat--until my MC actually is kidnapped by him.

I had written earlier drafts with him in it and from his viewpoint, but my crit group told me they thought the story would be stronger without him and that it was just taking away from the true story--my MC's striving to find acceptance in society.

The other "antagonist" is society as a whole. I would need an entire blog post to explain that one :P

I hate to admit this but I think my daughter would probably wear those shoes, just for the shock value. Ugh!

This is some of the best advice to making any character 3D. Esp. the villain. :)

Those shoes scared the bejeebies out of me the first time. They're backkkkkk! =)

I do have a NASTY villian in my new WIP. In my adventure the villain is the weather and the mountains. But now I have a guy who people love. Turns out he's the nasty guy. I'm loving it. *rubs hands together*

Those shoes are just too weird. I stopped by to let you know you won something on my blog. You are my 100th follower. Woohoo!

So true. When I think about the memorable books I've read, it seems that the more believable ones had an antagonist that was more human than monster. I could see some good in them, rather than just "You're evil!" Fascinating to consider to create a believable villain!

The first version I had of Aunt Ruby, she was just this abusive bee-otch - but then, I knew she was more than that and so I showed this other side of her - showing Vk how to cook, secrets about hair, how to fold towels so they fit in the cabinet....etc -- she is still a beeotch, but she's also human.

:) those are creepy shoes! ugh!

Those shoes still seriously creep me out. I just can't get over it.

My antagonist is actually a nice guy. I feel sort of bad for him that he has to be the bad guy in the story, because he's trying to do the right thing.