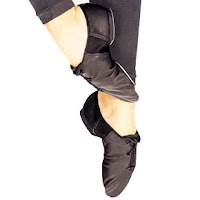 I've seen blogs recently that the author posts pictures of what they think the characters in their manuscript look like. Well, I thought I'd do something similar over the next few days. Only I'm going to show you what shoes my characters would most likely be seen wearing. I thought I should start with my female protagonist. Thus the dance shoes shown here. Laney is sixteen years old and a junior in high school. She's a member of the Hillsboro High dance team, so a good chunk of her time is spent in dance shoes similar to these.

She couldn't care less about what others think of her, except Jack, of course. But we'll get to him later. Her appearance has never been a concern for her. After all, I created her, and she is naturally beautiful. Until life began to unravel for her, she could have just as easily been seen wearing flip-flops in the winter as in the summer.

But now that things have gotten a little hairy for her, she seeks comfort and security in the small things, so she would be more likely to wear these furry boots when the weather is bad. She'll take any amount of protection she can get. Don't get me wrong; her flip-flops still sit by the back door, waiting for the day she is safe again. So, there you have it. That's what shoes my female protagonist would wear. What about yours?
Posted by Susan R. Mills at 8:00 AM

This is great! I love how we get a sense of her just from the shoes she's wearting. Very nicely done!

I love this idea! :D Mine would go barefoot most of the time if her guardian didn't force her to wear tight fitting boots with way too many buttons! ;)

How clever! I love this post!! I have to admit I've never given a thought to what my characters might be wearing on their feet...

That is so creative Susan. I don't think I've ever given much thought to footwear, but the MC in my current story (an eleven-year-old boy) probably wears stinky athletic shoes everyday.

I have one character that goes from black duty boots, to brown cowboy boots, to golden slippers. I hadn't thought about what her closet must look like until now... :)

Oh, probably tennis shoes. Or running shoes, there is a lot of running in my book. =) But she does go to Mexico, so flip-flops there. Okay, I've gotta go shoe shopping.

Hmmm. My novel is set in 1863 so my characters are wearing their only pair!

Susan, I have given thought to the footwear, only because both my MC's are riding horses. So they wear riding boots, but also have flip-flops waiting on them to return home. (They are lost in the mountains.)

What a super fantastic post. It made me think about the shoes in my WIP. Thanks for this. Oh and like Carolyn, I need to go shoe shopping. *grin* Or maybe UGGS shopping. =)

Tennis shoes and sweats right now, though she's mortified about it since she just met Mr. Mysterious atop Dragon Hill.

This is fantastic. I have such a sense of your character from these descriptions of her footwear! Great idea.

Very creative! Oh man, I have no idea. Probably some sketchers or something. I'd never actually thought about it. Sounds like fun though to try and figure it out. Thanks for sharing :o)

I love this post. What a great idea. Shoes say so much about a person, don't they? Since I write dystopian, my character's shoes are always lost, rugged, or burnt. Yes, burnt. They'll take anything they can get.

I can totally see Laney in those shoes. I'll have to think about what shoes my characters would wear, probably some kind of runner since they're always climbing cliffs or trudging through caves.

Cool! I love what you learn about a person from her shoes. You're on to something significant here. And since I'm busy writing "My Grandma Says" poems, I have to say, Grandma wears sneakers much of the time, since she is very into comfort and practicality. But she missed the days of power suits and high heels from time to time!

My female protagonist, Marlena: No shoes at all (but you already know that)

Very cool! I think you just created a word character sketch with shoe analogies. Love it!

Well, since Hatshepsut's in ancient Egypt, I'm going with sandals. But not the kind made from papyrus- hers are leather gilded with gold. Or solid gold ones for ceremonies.

My female protag mostly wearing hiking boots and sneakers, but she does occasionally like to get all glammed up and wear fabulous heels.

Well, my MC Naomi doesn't really know...she's caught between two cultures and though she hates the tight button up shoes of the Victorian era, she's not entirely comfortable wearing tabi socks and geta (Japanese sandals). As with most things in life, she's caught in the middle :P

Now my MC for my other WiP, the snow woman turned human Miyuki would much rather go barefoot. She hasn't worn shoes of any sort for centuries, so wearing the geta or the straw sandals or even socks is a little bit of a challenge for her.

Love this post- it really makes me think. My MC is free spirited and moving, almost breezy. She would be wearing a ballet flats. Yep, I can see it now!

How fun!
My MC is wearing flip-flops in the first chapter.

lol, you're too funny with the shoe thing. Hmm, my female MC would most likely wear heeled boots--dressy yet spunky at the same time.

You are so creative. Amazing how you come up with this stuff. I like your shoe comparisons.

What a fun way to get to know your MC's!!

I think my heroine would be barefoot. She's an outdoorsy kind of gal and loves to fish. Half boots wouldn't work well wading into a stream. Now, my hero would definitely be sporting a pair of gleaming Hessians- dashing rake that he is. (obvious conflict, huh? lol)

Your posts continue to beguile me! I'm so glad I found your blog. :)

My MC alternates between ladies' slippers (it's a more medieval type of setting and so think shoes like in Romeo and Juliet) and soft leather boots, depending on whether she's in her uniform or in street clothes.

Oh! I LOVE this question, especially because I just wrote about my MC's shoes last night. She is timid and lacks self-confidence and is never impressed with her own appearance. She tries to hide behind her clothes. In the last scene she was wearing dull navy dress shoes without heels (which were nearly covered by her long, bulky skirt).

All the answers were fun to read through.

Yeah know I honestly didn't think much about my characters outfits!!! Woa, I feel like where have I been?? lol. I have no idea what shoes she'll wear!!! Probably sneakers so she can run from the zombies. hehe. =)

Interesting idea, Susan. I might try to do something like that, just for character development purposes. Adds a whole new dimension! :)

Very cute. I'm glad you didn't post pictures of your MC... I rather like creating my own picture as I read a book.

Ballet slippers and high heeled boots. I am not sure yet, but I like wearing both. I love this idea of discovering our main character even more.

Shoes... well at the beginning of the novel she spills coffee on her black, polished leather heels, so I guess that's that!

my guys wear boots. not very original, but very practical for what they have to do.

I love this! Great characterization! :) Let's see, Lexi is ultra low maintenance. She wears slip on shoes, but not sandals. Sometimes it's tennis shoes with the laces ripped out.

Susan! You rock! I love this idea, and I LOVED getting a peep at your MC.

LOL I love what you did with this!!
Mine wears good running shoes but they are getting a little old and tattered as the money went dry:)

My MC wears a pair of sturdy, if second hand, brown leather ankle boots. It's actually something I make a bit of a deal about in the story.

My female protagonist, Rachel Temple has been sent back in time to the late 1800s and I haven't mentioned her shoes. Thank you. I'm guessing she's wearing something black and uncomfortable...

I'm thinking maybe she oughta change her style.. my character that is.

Actually, if she were on the dance team, her shoes would probably not have laces; they would be slip-ons. Just kidding. LOL Seriously, though, I'm on my college dance team, and we have to wear the slip-on kind. The ones with the ties are for dance CLASSES at a studio. Most dance teams are picky about what you wear.