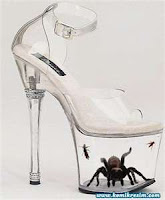 This shoe brings up all kinds of emotion! Mostly fear. Not only of the thing inside it, but the height of that heel! Yeesh! I'd break my neck if I tried to wear that thing. I'm sure there would be a time and place where one might wear such a thing. Take a Halloween costume party for example.

I'll be back next week for more on the topic of backstory. Until then, have a great weekend!

I totally agree that back story helps with motivation for a character. In fact, it can be a very useful tool for that. Have a good weekend.

I'm glad to see the spider has air holes and snacks! :O)

Based on feedback from an editor,I added some backstory early on, hoping to exactly that--heighten emotions. Great post.

I can't see any air holes! How will that icky thing stay alive?

The trick is, getting all that right! Such fun :)

That shoe is scary!!

My crit partner is such a gem. I gave her the first 6 chapters and she immediately marked spots were I could into more depth and add some backstory or reasons why my hero is conflicted. So instead of deleting, I'm adding. Go figure. LOL

I just did the icky dance where I feel like spiders are crawling all over me and I cant get them off.

Totally agree.. without backstory we wouldn't know why the character behaves the way they do.

It's hard to figure isn't it? Great post though. I think I'll take a look at one of my stories where this might be the thing that is needed. Thanks Sus. Have a super weekend. (((hugs)))

With regards to back story and where to put it, I ask myself if it is moving the story forward as well as developing character.
Thanks, Susan!! :-)

That link had great info. I use back story sparingly. My crit group and beta readers let me know if I need to move back story pieces to a later part of the story or advise on breaking it apart.

The contents of that shoe are scary.

All I can say is, "EEEEEEKKKKKK!!!!!!!" to both the heel and the spider. I'll definitely pass.

Those are some wild shoes. I don't know if I could walk with a spider the size of a tennis ball under my shoe. Creepy. And the heels. I'm with you.

I'd never put it to words before, but I like how you worded it: adding emotional weight to the story. Because that's exactly what good backstory does--it strengthens the story and draws the reader in. :)

I can't think of a book where backstory hooked me. Perhaps it has. But I do know that it gives an emotional punch that the story would lack without it.

Those shoes are creepy. What if somehow the heel broke and the spider came out. I know it's dead, but still - it's yucky.

Backstory is one of the toughest things to get right I think. Especially in that opening chapter when there is so much pressure to show everything at once--who the character is, what the problem is, the setting an emotional connection...*head explodes*

I'll check out that link--thanks Susan! :)

Those shoes are just scary!

And I agree with the back story bringing emotion. It totally does, especially if done right. ;)

If I saw a woman wearing those shoes I would run far, far away!

Back story can be difficult to work in a times, but...I still wouldn't try on that shoe;)

That shoe is tooo creepy!

And for the record, I tried on a pair of shoes that weren't quite that high, but close, just to see what they felt like. I do NOT understand how anybody could ever walk normally in them!

Great post and the link to Darcy's article was extremely helpful. I just added backstory earlier than I normally would have, but I did so on the advice of a plot consultant.

Freaky shoe. I am a new follower. Happy to be here.