Watch Out For That Plot Hole! 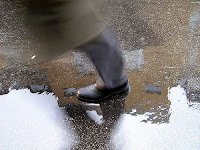 It's an accident waiting to happen. Speaking of accidents... I've read about plot hole disasters on several different blogs. It amazed me that this could happen. As authors, don't we know where each and every one of our characters is and what he or she is doing at all times? Don't we know the story forward and backward? Most importantly, aren't we in charge of it? How can we let a plot hole develop when we have so much control? Ah, but it happened to me. I had a secondary character drive over and pick up my MC. Not a problem, right? Well, unfortunately, the secondary character had totaled her car a while back, and she had a broken leg, both of which prevented her from driving. My dear, sweet, faithful, and talented crit partners didn't even notice that one. I didn't catch it until I went back to add some detail to the wreck scene. Oh, my! There are also smaller plot holes that may go unnoticed. Keep a watchful eye for those. I had one character listening to sleet hit the window, and moments later, another character squinted in the sun. Now, Kansas weather can change on a dime, but not quite that quick. So, whether you think it can happen or not, it can. And don't rely on others to catch it for you. It may be so subtle that only the recreational reader will pick up on it. Have you ever caught yourself in a little plot hole? How did you find it? Have a great weekend!
Posted by Susan R. Mills at 8:00 AM

Oh I've tripped, fallen, and sunk into many plot holes. I gotta stop looking up. It's dangerous. ;)

I've seen this in movies and it totally annoys me. :O)

Oh good it's not just me. We notice the big holes but it's easy to miss the little ones. I'm finding mine now because I'm slowly analzing each scene--and I mean slowly--and questioning everything I wrote. Things I took for granted are now flashing with big blinking neon signs. Like if my mc has her arm in a sling then how did she get her hoodie on?

I think catching plot holes comes from really paying attention to what you're reading. Whether you wrote it or not, careful reading helps us see what's going on and catch all the holes.

Oh, yeah, it's easy to miss those little things that hide quietly in the manuscript waiting to embarrass us. ;)

I catch more of those when I print out my work.

Plot holes can be hard to find! They can be really sneaky...

Plot holes are sneaky and slippery. I have a hard time spotting them, but fortunately, my betas have good eyes.

I do hate reading a book with a major plot hole though. Ugh.

I have so much time that goes between writing periods for my book that I have to read a great deal of it before I can pick up where I left off. Reason being...I've hit a few plot holes myself and they left me with flat tires ;-/

I talk my way through my plot holes. I think I have a pretty good grasp of my characters.

Which isn't to say I'm perfect. It just means I haven't found them yet!

Good post. Definitely something to look out for. I hate stepping into them in mine or other people's work.

I usually spot them, but one popped up the other day that I'm embarrassed I hadn't caught far sooner -- I'd setup that people were in a car -- a Mustang -- and that the MC got out of the back door... Mustang's are 2 door cars. The Mustang is now a BMW :)

Of course! I find small things all the time!

ah oh...so funny when stuff like this happens. as writers we need to be razor sharp...LOL!

I find plot holes in books that are on bestseller lists and wonder how in the world it can happen. But it does, so I'm very careful. Have a great weekend, Susan.

So many plot holes. I've got some right now that I need to fix.

My last project was full of them. And I never did try to navigate my way out of them. Oh well. Fun post.

I've caught a few myself. Sometimes just from walking through the novel in my head. I have to admit that my husband is best at catching them though. He rocks!

A few weeks ago I read a book who had a character with only one arm (other one lost in the war). During a love scene with, the author kept writing 'he wrapped his arms around her' or 'held her in his arms'. It drove me crazy. I could barely focus on the rest of the book. He had one arm!

I'm easily distracted I know but I couldn't help it. (-:

I think an extra of each ms is needed just to make sure weather and the time of day is correct! Thank God for crit partners!

A few years ago I was reading a fantasy series where one character lost a limb. In a following book that same character had taken up an occupation that would be IMPOSSIBLE because they only had one arm. And this was PUBLISHED. The author had to amend it in later editions!

I've read many published books with plot holes. Amazes me and frustrates me as a reader. Sort of like when an author digs us so deeply in and then doesn't tie up all the ends created.

Plot holes - need to be especially aware when we revise.

Hi there! Yup, I've found tons of plot holes in my manuscripts. Most of them were more abstract/theoretical, ("That couldn't/wouldn't really happen because...") but I've found some more obvious ones too.

Psst... I don't know if you've read the Twilight books, but if it makes you feel better (since they're published and all), in one of the books, Bella makes pancakes for her dad... but a few paragraphs later, he's staring into his cereal bowl. Oops!

I've been guilty of a few plot holes. (but I'm fixing them)

I've seen them in movies and I always wonder why they were never caught by the film editors.

Oh yeah. Laura always catches my plot holes. And she asks all these annoying questions and it drives me insane even though I know she's right.

Have a great weekend and avoid plot holes!

Oh, I'm definitely guilty of this. I had to make a flip book of character looks so I wouldn't forget who had what colored eyes. It got pretty crazy there for a while!

Once I again I suffer from this affliction in real life! Sheesh! Just the other day I was cooking lunch and walked to the back of the house for a clean towel and plum forgot what I was doing and why I was there. What can I say, plot holes happen . . . or my kids are just eating my brain. :)

There's a murder scene blogfest going on, did you know? http://annerileybooks.com/2010/03/its-gonna-be-a-bloody-one-folks-murder-scene-blogfest-is-here/.
Come check out my entry from my fantasy Titanic, RITES OF PASSAGE :
http://rolandyeomans.blogspot.com/

Great post! It is so true, we can slip into plot holes with the blink of an eye. Frustrating to say the least.

I think my characters may be sinking into a major plot hole right now. I'm hoping I can pull them out though and make it all work. We'll see.

I'm sure I've done things like that. I usually catch them on the rewrites, though. Some funny exacples in your post and in the comments. Mine probably aren't that amusing.

So easy to do - especially on a long project in which you don't read chapters 1-3 in months, lol! That's why we need good critique partners.

Oh my goodness, it happens to me ALL THE TIME. But it's ok. I just revise a few hundred times and that takes care of it (I'm being sarcastic of course).

As for the question about whether or n ot we're in charge of our stories, I don't seem to be in charge of what I write. The story seems to take charge of me. It's the only way I can do it. I'm not one of those people who can diagram everything and follow a perfect road map. As a result, I'm having a huckuva hard time with the time travel story I'm writing...

So far none of them have required large scale rewrites, just a few sentences added somewhere. On the other hand, my chapter by chapter critique workshop might make it hard to find ones involving chapters far apart.

Plot holes are EVIL! That said, sometimes they do slip by. I usually catch mine when I'm going through edits. :D

I once had a character die and his body melt into the ground and disappear (this was a fantasy, obviously). About two paragraphs later I had his wife crying while she cradled his dead body. I totally missed this until one of my crit partners pointed it out. I couldn't believe I'd missed something so obvious! That taught me I can't be too careful in watching out for plot holes.

I love your play on words! You are so creative. I know I've done it before--usually with time elements. I find it hard to keep track what day it is often. Did it with a season too once:)

I agree with Terri, very cute play on words.

And I have found plot holes! The weird thing is I often find them not from reading the story, but at some point during the day when I'm just *thinking* about the story. Suddenly, the plot hole will just pop into my head.

One big reason I over-organize. It's my fear. So far, so good.

Holey plots, Batman!
Yes, I am always worried about this. I'm always so embarrassed when I find them, like someone's seeing my dirty laundry. Oops, you weren't supposed to see that!